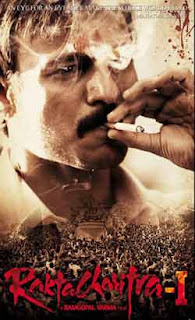 Filmmaker Ram Gopal Varma, known for his controversial comments, again spoke his mind when he said that his forthcoming film "Rakta Charitra" was not for people who are fond of Karan Johar's family drama "Kabhi Khushi Kabhie Gham".

Varma and Johar have often locked horns on various subjects on social networking sites and in front of the media and Varma didn't lose an opportunity to do the same at an event organised here, where the director showed 30 minutes of footage of "Rakta Charitra" to the media.

"I wanted to give a small introduction to the film and that was the purpose of showing this footage to a certain section of the people," Varma told reporters here.

"I have done films of this genre before. But the difference in ‘Rakta Charitra' or let's say in ‘Company' is that first, the latter has a urban setup and the second ‘Company' is different in terms of the characters and the way it has been shot.

"'Rakta Charitra' deals with very emotionally volatile people and is set in a rural atmosphere. It is a violent film. Having said that, violence doesn't come from a psychopath. It comes from a certain necessity. It comes from a struggle, certain have nots between communities, families and probably a struggle for power," he added.

The film is a trilingual made in Telugu, Hindi and Tamil. It is based on the life of Paritala Ravi, a slain factionist and political leader from Andhra Pradesh. The film stars Vivek Oberoi, Surya and Shatrughan Sinha in pivotal roles and is scheduled to be released Oct 22.

"In terms of the pitch of the film. I just want to quote an incident that happened with Hollywood filmmaker Quentin Tarantino.

"When he showed his first film ‘Pulp Fiction' to people, he apparently went on stage and asked the people that did any one of them like the ‘Rain Man'. About 30-40 people raised their hands. He told those people to leave because he said that this film was not for them," said Varma.

"So this film ‘Rakta Charitra' is not for the people who like ‘Kabhie Khushi Kabhie Gham'."
Posted by Indiblogs at 3:24 PM