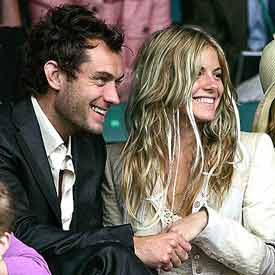 The couple took part in a spiritual ceremony in Laos in April during an Asian vacation, and many reports suggested the Baci ritual was a cover for a secret wedding.

However, Miller insists she did not marry the "Sherlock Holmes" star and just had their relationship "blessed", reports contactmusic.com.

"It wasn't a marriage ceremony at all. It was a blessing from a monk. The whole thing (about a wedding) was completely fabricated," she said.

The couple called off their engagement in 2006 shortly after Law's affair with his children's nanny was exposed. However, they reunited last year and went public with their rekindled romance in May.
Posted by Indiblogs at 4:32 PM