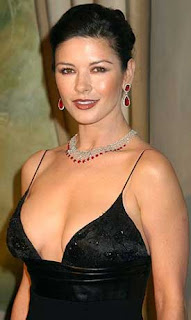 Douglas, who also has daughter Carys with Zeta-Jones, recently revealed the family moved to New York so that 10-year-old Dylan could attend a special school.

"New York is where we live now. We lived in Bermuda earlier. One of our kids has some special needs and it was recommended he go to a special school in the New York area," he said.

"Dyslexia runs in the family, even my brother has it. My son goes to a special school. We're old-fashioned parents, our kids have got British nannies and we get nice compliments from people. Our children make us proud," contactmusic.com quoted Douglas as saying.

"We just want them (kids) to be good citizens of the planet. They're not spoiled or obnoxious. They're well-mannered, confident, pretty worldly," he added.
Posted by Indiblogs at 3:52 PM