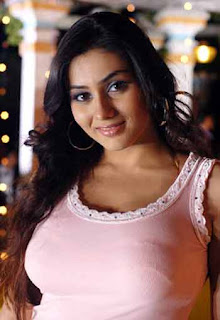 In a reel like but real life drama, an attempt to kidnap Tamil film actress Namitha was foiled in Tiruchirapalli in Tamil Nadu Tuesday.

Namitha reached Tiruchy in the morning by plane to take part in a function at Karur, around 330 km from here. She was to travel to Karur by car.

At the Trichy airport, a man identified as Periasamy introduced himself to her as the driver arranged by the function organisers.

Believing him, she boarded the car which sped away.

Seeing this, the real driver informed the organisers, who started chasing the speeding car.

The hot pursuit came to an end when the kidnapper car was overtaken and brought to a halt.

A subdued Periasamy told police that he was a fan of Namitha. But police said he was giving contradictory answers to other questions.
Posted by Indiblogs at 4:28 PM