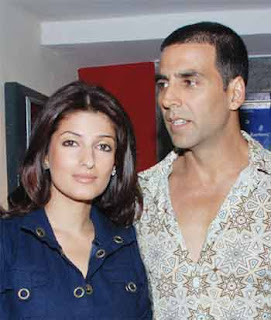 He might be a action star and a black belt holder in martial arts, but at home Akshay Kumar is just a wife-abiding husband and confesses that it is his better half Twinkle who calls the shot.

While shooting an episode for Star Plus show "MasterChef India", which goes on air Oct 16, the actor chatted with one of the contestants and her family members, where her husband revealed that his wife keeps him under control.

Akshay also joked that he might be a black belt in martial arts but in front of his wife "meri saari belt uttar jaati hai (My belt loses its relevance)."

Meanwhile, Akshay has got a new obsession.

While shooting one of the special espisodes in Udaipur, Akshay wore silver shoes and is now hooked on to it. "The actor has become a huge lover of silver shoes," said a source.
Posted by Indiblogs at 4:49 PM