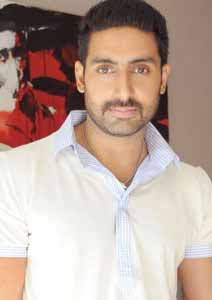 Abhishek Bachchan's role in "Dum Maaro Dum" is a homage to his father Amitabh Bachchan's portrayal of an irate cop cleansing corruption in the 1970s-release "Zanjeer".

Says a source: "Abhishek's role in 'Dum Maaro Dum' of a cop on a drug-busting mission in Goa has distinct shades of his dad's career-turning role as a cop settling scores in Zanjeer."

"Since both Junior Bachchan and director Rohan Sippy are huge fans of the Big B, Abhishek's role in 'Dum Maaro Dum' will now be a full-on homage to the irate cop's cleansing of corruption in Zanjeer," the source adds.

Apparently, the action sequences that were the forte of "Zanjeer" are now being strengthened in "Dum Maaro Dum".

The studio, whose maiden attempt at cracking Bollywood in "My Name Is Khan" showed impressive results, decided to squeeze in another quickie "Khichdi" to keep Fox's kitchen in India running until the next biggie had a free-way for a smooth run.

Serving up "Khichdi" served up a dual purpose. It provided an easily identifiable comic connectivity with the audience. And television actors had all the time in the world to give to the film as the serial had closed down two years ago.

Confirming that "Dum Maaro Dum" had indeed been pushed to next year to accommodate the other two Abhishek starrers, Fox Star Studio's CEO Vijay Singh says: "We are going to complete the film this month. But we'll hold on to it till April 2011."

"There's no point in cluttering the market with three Abhishek Bachchan-starrers. However, 'Khichdi' was not a stop-gap film for us. Much thought had gone into producing it," he adds.

Singh is proud that Khichdi was the first large-screen adaptation of a television series in India.

"We released it with as many as 400 prints across the country. For us it was not a small film at all. And it was certainly not a stop-gap project meant to absorb the delay in the release of Dum Maaro Dum," he says.
Posted by Indiblogs at 4:20 PM