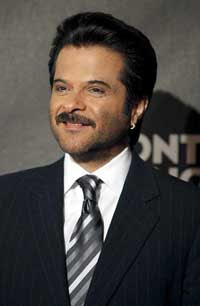 Anil Kapoor can't get over his roots - so much so that he took time off from the shooting of "Mission: Impossible 4" with Tom Cruise to appear on the game show "Kaun Banega Crorepati" (KBC), hosted by Amitabh Bachchan.

Anil, who is shooting for the fourth instalment of the iconic action-adventure series with Cruise in Dubai, requested the MI4 team to wrap up the shoot as quickly as possible as it was clashing with his date for the game show in Mumbai.

The actor, who rose to prominence in the West after his stint as a game show host in Danny Boyle's multiple Oscar-award winning underdog drama "Slumdog Millionaire", was in Mumbai Sunday to shoot the special episode to promote his forthcoming laugh riot "No Problem", said a statement from the film's promotional team.

Also joining him on the hot seat were co-stars Sanjay Dutt and Kangana Ranaut.

Releasing Dec 10, it has been directed by Anees Bazmee.
Posted by Indiblogs at 4:40 PM