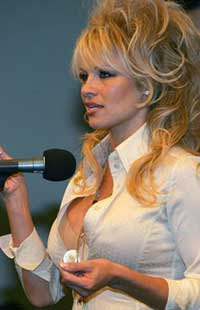 What could set the mercury at the "Bigg Boss 4" house soaring real high? Well, international star Pamela Anderson of course.

The former "Baywatch" star, best known for her sex appeal, is expected to land in Mumbai Monday night and will enter the show next week, according to highly placed sources.

In case she is on the show, the 43-year-old will be the third international celebrity to be on "Bigg Boss", the Indian version of internationally popular show "Big Brother".

The "Bigg Boss 4" house in Lonavala, Maharashtra, is already quite a pot full of controversies ever since loud-mouthed actress Dolly Bindra entered the show.

There are catfights and arguments, oodles of love and romance, jealousy and rivalry... but it will be interesting to see how the housemates take to Pamela's entry.

Pakistani actress Veena Malik is already a hot piece on the reality show.

The ongoing season of the show, where celebrities are locked inside an isolated house without any communication with outsiders, is being hosted by Bollywood star Salman Khan.