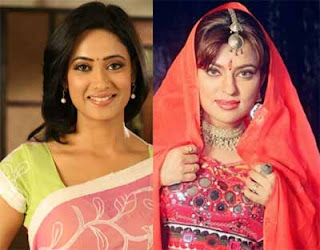 It seems loud-mouthed Dolly Bindra has taken a U-turn after her exit and, since making a second entry in the "Bigg Boss" house, apologised to Shweta Tiwari for her earlier behaviour.

Dolly was ousted after she had a fight with Shweta and Samir Soni. But the actress, who was known for her vulgar verbal attacks and loud behaviour, has adopted a calm demeanour after her re-entry on the popular Colors' show.

"Dolly apologised to Shweta for her personal attack on her and for behaving badly with her. This came as a surprise to everyone because she could not see eye to eye with Shweta. This time around she is mingling with everyone and is quite calm unlike last time," a source from the channel Colors told IANS.

The housemates will also be given a task, under which they will have to treat Dolly like a queen and pamper her.

It has to be seen how long Dolly continues with her new avatar.
Posted by Indiblogs at 3:16 PM