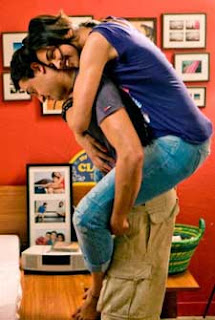 "It's a young urban story, but at its heart it has a classical romantic element to it," Imran said about the film.

The story of the movie focuses on Abhay Gulati (Imran) and Aaliya Khan (Deepika), who are childhood friends turned lovers. While Aaliya desires to become an actress irrespective of whatever it takes, Abhay is still unsure about his calling. As their relationship blossoms, the pair start facing differences due to their different personalities.

Things become difficult when Aaliya decides to go to Australia for further studies and Abhay gets restricted to a long distance relationship, and fears that he will lose her forever. They then decide to take time off from each other to figure out their priorities in life and career.

The two eventually make mistakes, deal with disappointments, even lose each other but become stronger individually.

"Space is a word that is used a lot in a modern relationship. It's almost a break-up mantra. I wanted to explore that concept rather than a conventional love story where two people don't know each other, meet and fall in love," Aslam told IANS.

"I wanted to show what happens to two people, who have known each other for their entire life, if their relationship breaks. I found the concept more exciting than just writing run-of-the-mill love story," he added.

Talking about her character Aliya, Deepika said: "She believes that if you are in a relationship, it doesn't mean you have to get married. She doesn't believe that a couple have to live together and certain things like that. Her way of thinking about a relationship is very different. She is also very immature sometimes when it comes to relationships," she added.

Imran said that he could easily relate to his character in this film as he found himself in a similar situation a few years ago.

"So being in a relationship and not knowing where my life was headed is something I could relate to," said Imran.

Both actors are looking for a hit with "Break Ke Baad" as both their last outings "I Hate Luv Storys" and "Lafange Parindey", respectively, tanked at the box office.
Posted by Indiblogs at 3:53 PM