Chetan Bhagat says 'Films on my books increase my reach' 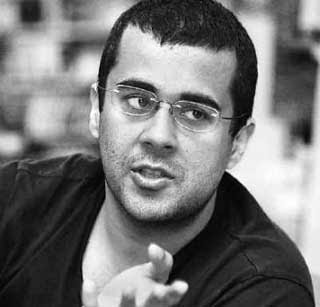 Two of his books have been made into films, one of them the superhit "3 Idiots", while a producer is interested in his third book. Author Chetan Bhagat promises a fourth one next year and is happy that his work can be adapted to reach more people.

While "Hello", starring Salman Khan, was based on his book "One Night @ the Call Centre", box-office hit "3 Idiots' was inspired by his book "Five Point Someone". Directed by Rajkumar Hirani, "3 Idiots" had Aamir Khan, R. Madhavan, Sharman Joshi and Kareena Kapoor in lead roles.

"My stories are very Indian, very middle class, funny, simple; so I think Bollywood is looking for stories now...'3 Idiots' success has shown they can be adapted successfully, so that's why it's happening and it's good for me because I want to reach as many Indians as possible. But I write in English; if I write in Hindi the reach increases," Bhagat told IANS in an interview.

Bollywood producer Sajid Nadiadwala has apparently shown interest in making a film on his third book "2 States: The Story of My Marriage". The book is all about a girl from Tamil Nadu and a Punjabi boy falling in love and doing everything possible to make their parents come around and accept the relationship.

The investment banker-turned-author never expected that his name would be listed among TIME magazine's 100 most influential persons of the world this year. He attributes this recognition and fame to his connect with a large section of youth-just through his books.

"It felt amazing because it was not something I expected. I think lots of Indians deserve it more. I guess they noticed that I have a big connect with the youth of the country, that I have done only through my books, so I think that's what really works," said Bhagat.

Asked if he had started writing his next book, the author said: "There will be a new book next year."

The 36-year-old doesn't rule out the possibility of writing a film script as well some time.

"I might write a script. It depends on the offer. Considering it...but not certain about it," Bhagat said.
Posted by Indiblogs at 3:34 PM