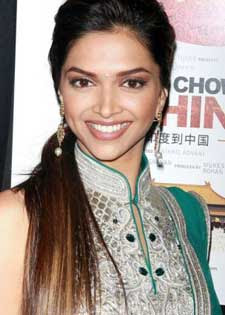 Deepika Padukone admits that she was supposed to do Vishal Bharadwaj's film -- but couldn't because of the dates problems.

"As far as Vishal's film is concerned, yes I was meant to do it but sometimes things don't work out. The dates got pushed and didn't fall into my schedule. Sometimes these things happen," Deepika told IANS.

Apparently Bharadwaj is miffed with Deepika for not doing his project and the young actress feels that while accepting an offer an actor has to consider other logistics apart from the script.

"When actors decide to do a film, it's not only the scrip, other logistics also need to fall in place," said the actress who is not willing to say much on the subject.

"I don't want to discuss it too much because it's not right for me to talk about a film that I am not part of. I have a lot of respect for Vishal and I would love to work with him, unfortunately this one didn't work out," said Deepika.

Her forthcoming release is "Break Ke Baad" and her future projects include "Desi Boys", which is directorial debut of David Dhawan's son Rohit and Prakash Jha's "Arakshan".
Posted by Indiblogs at 4:40 PM