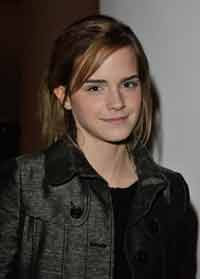 Actress Emma Watson, who is single right now, says she wants to be in love but men neither ask her out nor she gets marriage proposals.

"It's time I got more naughty. Three months ago I cut my hair and at that moment I felt I became a woman. I'm ready to start taking risks," thesun.co.uk quoted Watson as saying.

The 20-year-old, known for her role as Hermione Granger in the hit "Harry Potter" franchise, says men rarely ask her for a date.

"I'm very romantic and, of course, I want to be in love. I've been in love once in my life, but it was complicated. I can't tell you who it was because it wouldn't be fair... But I can say I've never had my heart broken."

"I like men with quick wit, good conversation and a great sense of humour. I love banter. I want a man to like me for me. I want him to be authentic. But men don't really ask me out. And I don't get marriage proposals any more either. It's not happening there," she added.

But is she ready to mingle?

"At the moment I'm just happy to be single. I want to live life to the full. But I'm more grown up and confident now. I'm ready to take more risks. I feel less girlish than ever."

Watson was only nine when she was cast to play Hermione Granger in the film adaptations of JK Rowling's hugely successful Harry Potter books.
Posted by Indiblogs at 8:44 PM