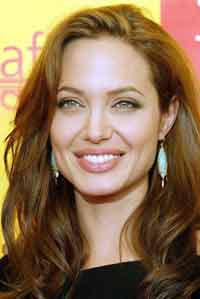 Actress Angelina Jolie says being a mother to six children is tiring and that she is able to relax only when she is working.

The 35-year-old, who raises six children - Maddox, 9, Pax, 7, Zahara, 5, Shiloh, 4, and two-year-old twins Knox and Vivienne - with partner Brad Pitt, admits having such a large family can be quite hard, reports femalefirst.co.uk.

"When me or Brad go away and work on films, it gives us a bit of a break from the daily routine of being in the house and looking after the kids," said Joile.

"You get spoiled on a film set and in some ways it's easier to be working long hours on a movie than taking care of a large family just because you do get very tired at the end of the day," she added.
Posted by Indiblogs at 4:09 PM