For Ranbir Kapoor, Money was never a driving factor 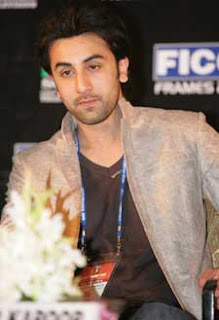 Bollywood heartthrob Ranbir Kapoor is not concerned about making money because his aim is to be known as a good actor.

"Money has never been a driving factor for me. I want to be known as the biggest star for the work I have done," said Ranbir at the HT Leadership Summit here Friday.

"I have to break the benchmarks. I don't get affected by the perks that comes with an actor. It is all about how much you take and how you give. You need to be a good person and audiences should like you. Work is more important than fame," he added.

Ranbir made his Bollywood debut with Sanjay Leela Bhansali's "Saawariya" alongside Sonam Kapoor. The film didn't do well at the box office, but he proved his mettle with his next releases "Bachna Ae Haseeno", "Ajab Prem Ki Gajab Kahani", "Wake Up Sid" and "Rajneeti".

"I consider myself lucky that I got an opportunity to work with some of the greatest directors. I just happened to be at the right place at the right time," he added.
Posted by Indiblogs at 4:38 PM