Freida Pinto says no to Bollywood 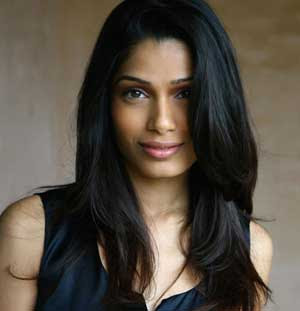 "Slumdog Millionaire" star Freida Pinto has ruled out plans of starring in Bollywood films as she is interested in more real cinema rather than the song and dance routines.

She has been offered several "stereotypical" roles for "a girl from India" since finding fame - but she's adamant she will avoid parts in all-singing, all-dancing Bollywood movies, contactmusic.com reports.

"I wouldn't want to do a Bollywood film per se, but I would like to do an Indian language film. For some reason I think Bollywood has become synonymous with commercial cinema, which is song and dance and everything that is larger than life. I am interested in the reality," she said to a magazine.

"It is great to have entertainment, but I think there needs to be something that also makes you want to go back and think about what you've seen," she added.

"Mindless cinema is not my cup of tea...I could get into trouble for saying that. I don't think Bollywood is only mindless cinema, but a lot of films they churn out are not films that I completely enjoy watching," the actress said.

"I say hats off to them for doing what they do, because it takes a lot of courage. It is easier to stand and deliver dialogue. Imagine dancing a song out and kind of expressing through it. I think it is a challenge and requires you to lose your inhibitions," she added.
Posted by Indiblogs at 3:12 PM