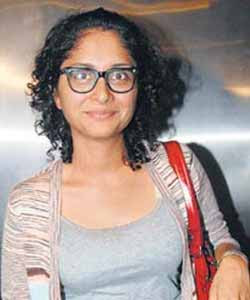 No one beats Aamir Khan when it comes to his out-of-the-box promotional strategies. Now his wife Kiran Rao is following her perfectionist hubby's footprints and sending hand-written post cards to invite the media to a screening of her directorial debut "Dhobhi Ghat".

"What started five years ago as a vague idea is now a 100-minute reality and I am most excited (and very nervous)," Kiran wrote in a handwritten post card inviting the media for a dekko at her film's first look Nov 17 in Mumbai, a copy of which is with IANS.

Kiran will write personal notes about her experience in the city and while shooting there every week on a post card before dispatching it to the scribes.

Essentially about Mumbai, its essence and its people, "Dhobhi Ghat" revolves around four characters in the Maximum city. Produced by and starring Aamir, it has Prateik Babbar in the lead. It is releasing Jan 21.
Posted by Indiblogs at 5:09 PM