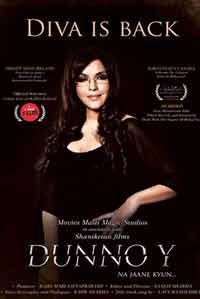 As far as scrutinizing a gay relationship is concerned, this isn't a patch on Ang Lee's "Brokeback Mountain". But still…it tries.

This fatally flawed look at the dark secrets of an Anglo-Indian family where the single mother sleeps with her cheesy boss for lack of choice and the elder married son with a child makes out with a man leaves us with some positive thoughts.

"Dunno Y…Na Jaane Kyun" is the first Hindi film to look at a gay relationship with some degree of dispassionate honesty. The script makes room for approximately 22-24 characters, which includes the entire malfunctional D'Souza family, their friends and lovers.

This is Sooraj Barjatya's "Hum Saath Saath Hain" gone to seed! The characters are not badly written. Even the performances are at times, convincing. And it takes inhuman amounts of guts for two male actors to make love on screen. Hats off to Kapil Sharma and newcomer Yuvraaj Parasher for strolling into alternate sexuality with such naked earnestness.

However, earnestness per se is not a redeeming quality unless compounded with creative conviction.

"Dunny Y" is high on drama, low on treatment and execution. Parts of unfolding trauma in the dysfunctional family are so strenuously dramatized, you wonder why director Sanjay Sharma did not go easy in the narration. Or why he chose to have the characters speak in English when some of them, including the film's leading man Kapil Sharma, are ill-at-ease in the lingo.

The dialogues often come out more forced than forceful. The talented cast too is unable to rise above the mundaneness of the material.

Zeenat Aman, as an abandoned wife and single mother, has the most interesting character to play. She struggles hard to make her lines sound believable. But she finally succumbs to pressures of pedestrianism that assail this well-meaning but aberrant film from all sides.

While the explicit gay love-making sequences are done with a bravado that's more corny than candid, a sub-plot about the gay protagonist's torrid affair with brother-in-law (Maradona Rebello) has potential. But by the time the 'neglected wife' and the in-house 'toyboy' get into a shower together, the passion and the pain of a family on the edge, have all been washed away.

"Dunno Y…"is a brave and unorthodox look at a malfunctional family's efforts to come to terms with the dark secrets in the closet. The courageous film looks at the question of forbidden desires. And the sheer pleasure of watching Zeenat Aman and Helen is incentive enough to overlook the film's fatal flaws.
Posted by Indiblogs at 3:39 PM