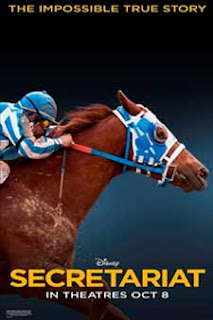 When still photography began in the early 18th century, a startling discovery was made - that for the briefest of moments all four feet of a horse are in the air i.e. a horse does not just run, it also flies. To believe it, watch "Secretariat", where in one of its most stunning moments captured in super slow motion, you see the horse - Secretariat - literally fly. Thankfully, so does the film.

Born and raised on a horse farm by her father, middle-aged Penny with her four children returns during her mother's funeral in the late '60s, to find her father almost a vegetable, and the prospect of selling off the loss-making family horse farm looming large.

Taught by her father never to give up, but having given up so much for her husband and her family, Penny reluctantly takes up the challenge to turn the farm around. When a pure-bred mare delivers a fowl, hopes are raised.

The horse, Red - officially named Secretariat - has his own idiosyncrasies and is born with the heart of a fighter. Together, man and horse will rediscover the old bond that brought them together, to write history.

Based on the true story of the 'greatest racehorse', "Secretariat" has many things going for it. What is not, is that not only does it sound like the last great horse film "Seabiscuit", it also looks like one. Indeed, you can call "Secretariat" a newer version.

Despite the obvious comparisons, the film does chart its own course, blending soft melodrama and hard reality into a very real and enjoyable cinema. Whereas "Seabiscuit" was about the relationship between man and horse, "Secretariat" is about the human condition.

The film, with great conviction and grace, interweaves many sub-plots and issues into one strong core. There's no demarcation between gender struggles, political issues - especially war and apartheid, yet all of them are handled without any becoming overbearing to the main story.

The main theme, however, remains that of gender. As a housewife in the late '60s, where a woman's place in America was still thought to be in the house, Penny has to face a lot of sexism. It is her strong will, which is gentle but during strife is headstrong, that pulls her and her motley crew through.

The pace of the film is gentle and lilting and is filled with some original and some cliched inspiring one-liners. Sample these, "It's not whether they think we won, but whether we think we won" and "father's legacy is the will to win or live with it if you can't".

The cast is impeccable. John Malcovich is his usual funny best, but it is Diane Lane as Penny who chooses to run a harder, and a much more hopeless race against gender discrimination, who steals the show. She is quiet, restrained and forceful when the scene demands it. Her performance is definitely Oscar material.

The horse, Secretariat, in all his races begins last only to end first. Just like his owner and quite a few of us. The message of this feel-good family entertainer is clear - you got to risk everything if you don't want to live your life in regret.
Posted by Indiblogs at 4:31 PM