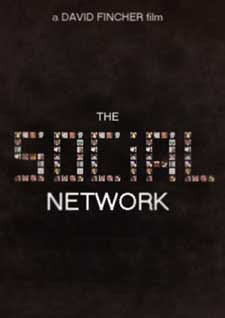 It had to take geniuses to pull this impossibility. How else can you explain engagement in a film on something that is impossible to show visually - technical wizardry? Many films have tried, but where others have failed, "The Social Network" soars, thanks largely to a brilliant script by Aaron Sorkin and the equally brilliant direction of David Fincher.

The global adulation for the film seems justified. Sadly, it suffers from major drawbacks that are, with equal brilliance, swept under the carpet of its sharp wit, edgy editing and a crisp direction.

Mark Zuckerberg is a computer nerd, but with zero social skills. The film begins with him being dumped by a girl. He tries to take revenge that further alienates the girl, but ends up leading to the creation of 'The Facebook' or 'Facebook' as we know today.

On the way he is sued by his business partners, manages to have the most 'friends' in the world but fails, till the end, to have a girl.

"The Social Network" looks at Zuckerberg as a saviour of humanity -- that is its first flaw. Facebook may have changed the way we interact considerably, but neither was it the first, nor has it changed the world irrevocably, yet. The excessive adulation for its creator thus sounds anomalous.

Perhaps we cannot blame the director and the writer for this. Rarely has a public figure got a film so quick in his career. But it couldn't wait, after all just like MySpace and Orkut before, Facebook might soon be off our radar. Obviously they had to be quick.

Even the makers of "Pirates of the Silicon Valley", the story of another jerky nerd, Steve Jobs, and the birth of personal computing that has indeed changed the world, does not succeed as well "The Social Network", despite being more politically correct.

Indeed this film takes the best of "Pirates…" while smoothening out its rough. Yet, the basic question remains, does Zuckerberg deserve a film at all?

Answer in the yes would imply that you truly believe that Facebook has changed the face of the earth. Which, to the lucky few who can spend hours daily on Facebook, would be the truth. But not the vast majority who don't even know what it is.

Like superhero films, Hollywood also has its super-nerd films. And this has to be the mother of them all.

But "The Social Network" does suffer from an overdose of wit, which gets tiring after a certain point, and which makes an otherwise beautiful climax, look drab.

The other major problem is when it raises Mark Zuckerberg into not just a technological icon, which he rightfully is, but into a cultural icon, thus justifying all his flaws.
Posted by Indiblogs at 3:20 PM

Email ThisBlogThis!Share to TwitterShare to FacebookShare to Pinterest
Labels: Hollywood, The Social Network