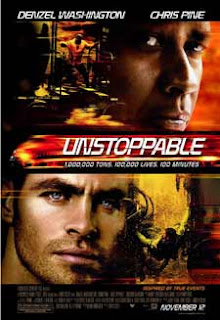 The '90s audience chased a bus in "Speed". The 2000s could have been the decade of the runaway train in "Unstoppable". Sadly the film trails off a wee bit in the end, preventing it from jumping over the precipice and reaching for its true potential.

A 'bad combination of human error and bad luck' sends a half a mile long freight train hurtling at 70 miles an hour without a driver. With dangerous, toxic explosives in its bogies, it is a missile, a disaster on wheels.

When all efforts to stop it fails, two drivers on a single engine - one, veteran Frank (Denzel Washington) with 28 years of experience in railroad and the other, Will (Chris Pine) a rookie, will risk their lives to do the impossible - chase the runaway train on reverse, couple it from behind, and stop it by reversing power.

"Unstoppable" is a simple, straightforward film of the old-world kind, but with modern special effects. At the onset, comparisons with "Speed" are imminent. But where "Speed" maintained its pace till the very end, "Unstoppable" does seem to drag at the very end when repeatedly used stock footage of the breakaway train becomes a tad irritating.

Yet, "Unstoppable" works on many levels. The shaky camera work, immaculate sound design and good cinematography ups the ante. Action veteran Tony Scott ("Top Gun", "Crimson Tide" and "Deja Vu") does a good job of keeping the tension going in this film apparently based on a true story.

This brings us to the 'inspired by true story' as a part of the plot. Without this disclaimer at the beginning of the film, "Unstoppable" would have lost much of the havoc it plays on the audience's mind. But this little piece of information triggers wild imagination of a real train somewhere, running amok. Though, the fact really is that worldwide hundreds of incidents of runaway trains are reported every year.

What also works is the acting of Denzel Washington, an actor who brings intensity to every role he takes up.

The sub-plots, character tension and the strife between age that brings experience and strength that comes with youth but is stupid, is handled well, with the winner being experience. The motto is clear - experience does matter.

It is also not easy to maintain tension in a film without the convenience of a visible villain to hate. A runaway freight train is no evil computer Hal ("2001: A Space Odyssey") with seemingly deliberate mal-intentions. Its achievement is hence that much more laudatory. The sub-plot of the typical perennially profit-seeking corporate, introduces villainy of the modern kind.
Posted by Indiblogs at 4:26 PM