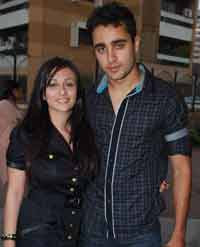 Bollywood heart-throb Imran Khan has revealed that he will have a court marriage with fiancee Avantika Malik to avoid committing his big day to any particular religion.

The actor, 27, has taken inspiration from Danish Aslam, the director of his upcoming movie "Break Ke Baad". Aslam opted for the same procedure to tie the knot with his actress wife Shruti Seth to avoid any religious clash.

"I am from a Muslim family and Avantika belongs to a Hindu family. I personally didn't want to commit our wedding to one religion or another. We felt the best way for us was that we would keep it neutral and have a court marriage," Imran said in a statement.

"Even Danish my director of 'Break Ke Baad' was in the same situation and had a court marriage," he added.

Imran and Avantika, both childhood sweethearts, got engaged in January this year at a farmhouse owned by the latter's family in Karjat. The marriage is scheduled to take place in the second week of January next year.