Jayaprada to star in a Malayalam film again 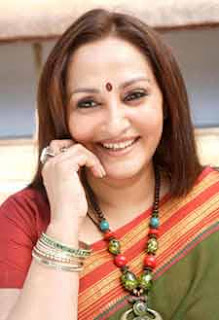 Lok Sabha member and popular actress Jayaprada Thursday announced she is doing a Malayalam film again. The movie will be directed by R. Sarath.

"Right know it is too early to give out the details. The script is getting ready and once that is done, we will let you know more about the film. It will be released next year," Jayaprada told reporters here.

She has done four Malayalam films so far and the last one was the 2000 release "Devadoothan" for which she teamed up with Mohanlal.

She was here to give company to former Samajwadi Party leader Amar Singh and actress Dimple Kapadia at the premiere of their Malayalam movie "Bombay Mittai".

On Amar Singh's acting, she said he has done a good job.

"This Malayalam film has a good message for the youth which says that they should not choose a wrong path. The central theme of the story is something which happens in our society and the youth in order to reach heights of glory make mistakes by choosing the wrong path," added Jayaprada.

The actress says she is devotionally attached to filmdom.

"I am devotionally attached to the film industry and this is the only field I know very well. But I never act in real life," said Jayaprada who in her three-decade acting career worked in seven languages and 300 films.

Some of her hit Hindi movies are "Sargam", "Sharabi" and "Sanjog".
Posted by Indiblogs at 4:45 PM