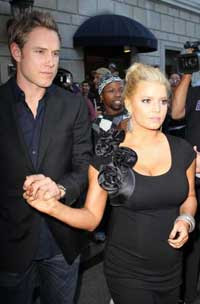 Singer Jessica Simpson celebrated her engagement with footballer Eric Johnson at a party with friends and family.

The celebrations involved about 40 to 50 people, including a few football players. All of them gathered at the California home of Simpson's parents, Joe and Tina.

"They were very happy. It was the first time they had seen a lot of their friends since the engagement. She was excited to see her girlfriends," usmagazine.com quoted a friend of Simpson as saying.

The couple began dating in June, when Johnson was separated from his wife of five years, Keri. Simpson split from ex-husband Nick Lachey, 37, in 2005.
Posted by Indiblogs at 3:47 PM