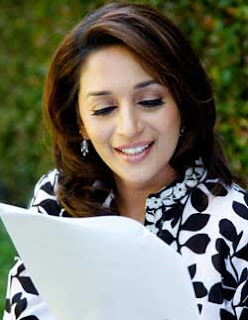 Bollywood's dancing queen Madhuri Dixit is back in business as one of the judges of the fourth season of dance reality show, "Jhalak Dikhhla Jaa". Choreographer Remo D'Souza will also join her.

But the third judge is yet to be revealed.

Rumours about Madhuri's comeback to the small screen were rife, but Sony TV confirmed her participation at a grand launch Thursday.

"It took us one-and-a-half-year to convince her to come here. Thanks to Rikkuji (Madhuri's secretary Rakesh Nath), she is now here. She has left her family in the US for the show and we are very grateful that she has made it on board," Ajit Thakur, executive vice president and business head of Sony TV, told reporters.

Madhuri, who still exudes elegance, made a grand entry in an orange-yellow sari with embroidery while dancers grooved to her hit numbers "Humko aajkal hai", "Ek do teen" and "Que sera sera". The diva enthralled the audience by matching steps with the dancers and later even with Remo.

"In the past, I have done 'Kahin Na Kahin Koi Hai' with Sony TV and I hope you all like 'Jhalak Dikhhla Jaa' now. It is an exciting show, and all the participating celebrities are not professional dancers. It would be great to see them dancing and competing," said Madhuri, who is settled in the US with her husband and two sons.

The actress, popular for films like "Khalnayak", "Saajan", "Ram Lakhan", "Hum Aapke Hain Koun" and "Devdas", says her criteria for judging will be the "attitude and performance".

"Jhalak Dikhhla Jaa 4", inspired by international show "Dancing With The Stars" and produced by BBC Worldwide Productions, will go on air Dec 12, and it will replace Amitabh Bachchan's "Kaun Banega Crorepati 2010".

According to officials, the dance reality show will be bigger and better this season.

"The technicians were actually sent to London to the sets of 'Dancing With The Stars' to see how the lighting and sets are done, so that they could absorb the technology. There will be 12 celebrities this time," said Myleeta Aga, general manager and creative head, BBC Worldwide Productions, India.
Posted by Indiblogs at 3:19 PM