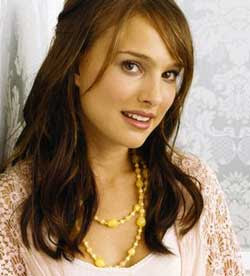 Actress Natalie Portman is reportedly running around movie studios with the script of a raunchy new comedy film she co-wrote with college friend Laura Moses.

Anne Hathaway is likely to star in the film titled "BYO (Bring Your Own)".

The film revolves around "two very different twentysomething women who, after finding themselves unlucky in love, decide to throw a party to which each female attendee brings an eligible bachelor".

Portman reportedly will star as one of the main female characters. Hathaway is said to have expressed interest to take up the other lead role, reports aceshowbiz.com.

Representatives for Hathaway and Portman could not be immediately reached for comment.

"BYO" will be the first movie written by Natalie Portman. The project has been passed on by several Hollywood studios, and could still be made via either a studio or independent financing. The 29-year-old beauty will additionally serve as producer for the flick.
Posted by Indiblogs at 4:08 PM