'No One Killed Jessica' is dramatic interpretation of case 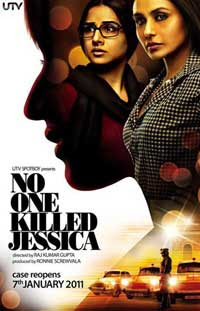 Director Rajkujmar Gupta says his forthcoming film "No One Killed Jessica" is his "own interpretation" of the case, but it is not judgemental.

"The trials of the Jessica Lall murder case were an important event in contemporary India. It was amazing to see how people rose to the occasion and spoke in unison for justice," Gupta told reporters at a press conference here Thursday.

"The media too played an important and proactive role in the case, and the film is my dramatic interpretation of the case. I have told the aftermath of the Jessica Lall murder case in a thrilling an entertaining way," he added.

In preparation for the film, the director spent several hours with Sabrina Lall, who fought relentlessly for justice for her sister Jessica, who was shot dead by Manu Sharma, the son of a powerful and wealthy politician, in April 1999.

"'No One Killed Jessica' is not just about the case. It is much more. It shows what happened after the case and how the people of the country reacted. It is a story of the a society and how one court judgement ends up uniting a country," said Gupta.

Produced by UTV Spotboy, the film features Vidya Balan as Sabrina while Rani Mukerji, plays a journalist who feels passionately for the case. It will hit the screens Jan 7 next year.

Producer Ronnie Screwvala describes "No One Killed Jessica" as a "very entertaining, poignant and hard-hitting film" and feels the "audience will have something to think and talk about once they watch the film."
Posted by Indiblogs at 4:11 PM

Email ThisBlogThis!Share to TwitterShare to FacebookShare to Pinterest
Labels: bollywood, No One Killed Jessica