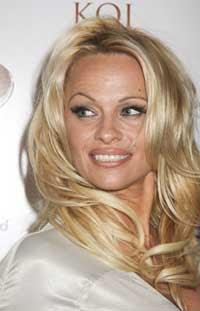 The 43-year-old looked ravishing as she entered the house with Yana Gupta's popular item number "Babuji zara dheere chalo" playing in the background. She greeted the housemates with a "Namaste", informs a source.

As expected, the housemates were quite excited to see Anderson, who has entered the show as a guest for three days.

"Ashmit Patel and Hrishant Goswami couldn't believe who they saw and hugged each other," said the source.

The episode showcasing the former "Baywatch" babe's entry will be telecast Wednesday night.

Anderson landed in Mumbai Monday night. This is her first visit to India and she hopes to get "some impressions" of the country during her stay.