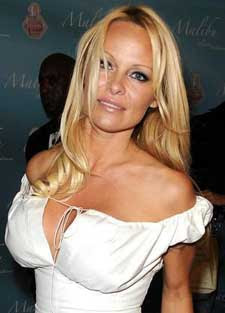 "I am calling on every kind person in India and throughout the world to join me in rejecting all leather products in order to help put an end to the suffering. I am asking every individual - man, woman and child - never to buy leather shoes, bags, jackets, belts or anything else made of animal skin," Pamela said in a press statement.

"Animals have no voice, so I feel compelled to speak up for them. Treat others as you would like to be treated. Every mom says it, but it's just so true," she added.

The 43-year-old Canadian model had written a letter to Prime Minister Manmohan Singh about the leather trade in India.

She wrote: "The reverence and love for animals felt by people in your beautiful country is deeply moving, yet one thing fills me and all compassionate people with horror: India's leather trade. It still profits from the skins of animals who have been transported to and killed in slaughterhouses, including illegal ones, in unspeakably cruel ways.

"In 10 years, it seems nothing has changed. I love India and the reverence for animals held by most Indians. Will the government act at all to help these cattle?"

In 2001, Anderson was part of a video that shows cruelty to animals in the international leather trade, which documented numerous violations of India's animal protection laws.

Later in 2003, she even sent out a letter to top Indian fashion designers urging them to use ethical and stylish alternatives in place of real skins in their fashions. The letter was accompanied by a video showing the fear and pain endured by animals who are killed for their skins.

In 2008, Pam appeared in a People for Ethical Treatment of Animals (PETA) India ad wearing only a leafy bikini alongside the tagline - Turn Over a New Leaf. Try Vegetarian.

Last year Pamela stepped up efforts to help Mumbai's stray dogs after she learned that they may be caught and cruelly killed.

From baring all to wearing a lettuce bikini to promote going vegetarian, Pamela never misses an opportunity to speak up for animal rights.

She also initiated a campaign in the US against food chain KFC urging them to improve animal welfare standards and require suppliers to use less cruel killing methods.

She stripped down, urging Israeli government to ban fur trade and unveiled her "Save the Seals" campaign to stop the cruel slaughter of seals in Canada.
Posted by Indiblogs at 4:16 PM