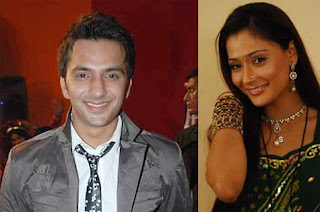 The marriage between Sara Khan and her beau Ali Merchant on "Bigg Boss 4" was nothing but "nonsense, completely fake and utterly staged", says Rahul Bhatt who was earlier evicted from the show. He also accuses Colors channel of changing his words to suit its TRP plans.

How can two people get married on a reality show, wondered Rahul.

"It's all nautanki (drama) staged for TRPs. If two people want to make a tamasha of their relationship, that's their problem. I refused to get pally with the girls just to spice up the show," he said.

In a shocking revelation, Rahul accused the channel of changing his words to suit their TRP plans.

We heard Rahul say in the confession room of "Bigg Boss" that television actress Shweta Tiwari was hitting on him. Rahul completely denies this allegation against the single mother.

"What I had said was, it was another contestant Sakshi Pradhan who was line-maroing (hitting) on me. Not Shweta Tiwari."

So how could Rahul be heard mentioning Shweta Tiwari's name?

Said Rahul: "Ask the channel that. They played a little bit of mischief. It was Sakshi Pradhan who was coming on strongly. Not Shweta Tiwari. You can see on the show we're absolutely comfortable with one another. They changed my words. They're ready to go to any lengths to spice up the show. Crazy!"

"The ladies were called ostensibly for counselling because they got emotionally disturbed. But they were actually in the confession room for 20-25 minutes, getting briefed on which male contestant to get friendly with, etc etc," he said.

"I was detached from all the drama. It was all very unreal for me. I was just being myself. I was boring because I was neither romancing nor fighting. Rather I was fighting off romancing," he quipped.

Rahul got along with Dolly Bindra in the house. "I found her to be quite forthright. She didn't do nautanki, though I didn't approve of her picking fights with Shweta Tiwari."

"Aanchal Kumar was the only girl I hit it off with. She's decent and cultured. I also got along with Khali, great guy who is honest. I can't forget that moment when Khali walked in through the 'Bigg Boss' door. He is my childhood idol. I also liked the Bhojpuri superstar Manoj Tiwari," he added.

So, how was the "Big Boss" experience?

Rahul said: "I can't say I didn't enjoy the 'Bigg Boss' experience. It was a learning experience. People had only heard about Rahul Bhatt. Now they've seen and heard me."

"I've developed great patience after the first controversy that happened to me (the David Headley case when Rahul was questioned for befriending the 26/11 plotter). It also made me wary of making friends," he said.

The original plan of Rahul playing a suicide bomber in a film has also been aborted. "Unfortunately 'Suicide Bomber' cannot be made now. It required international collaboration. Now the idea is obsolete."

The Bhatts have decided that "Suicide Bomber" as Rahul's debut would not quite be the politically correct move for the debutant after the unsavoury controversy regarding his unwitting and unsuspecting friendship with Headley made news some months ago.

"I'm very clear about the kind of work I want to do. I'm an action guy. So dad (Mahesh Bhatt) is trying to conceive something with a patriotic touch and lots of action for me. Good scripts are not easy to come by," Rahul said.

He is looking at making his debut with the kind of film that Salman Khan does. "Oh yes! I want to be launched in a film that is a hybridized version of what Salman and Sunny Deol do. I think that's my forte."
Posted by Indiblogs at 3:53 PM