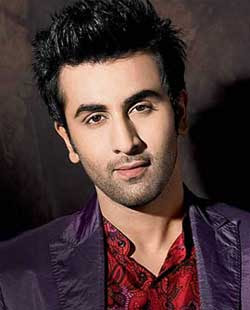 The 28-year old actor, who made his debut three years back, received the trophy from veteran actor Anupam Kher and lyricist Prasoon Joshi.

Before starting off his career as an actor, Ranbir worked as an assistant with director Sanjay Leela Bhansali, whom he assisted in "Black".

He later made his acting debut in Bhansali's "Saawariya", opposite Sonam Kapoor. The film was a dud at the box office, though his performance was largely appreciated.

Ranbir tasted both critical and commercial success with romantic comedy "Bachna Ae Haseeno" the following year. He went on to do films like "Wake Up Sid", "Ajab Prem Ki Ghazab Kahani", "Rocket Singh: Salesman of the Year", "Rajneeti" and the recently released "Anjaana Anjaani".

Instituted in 2001, the awards are organised by liquor company Beam Global Spirits and Wine, owner of the Teacher's brand.
Posted by Indiblogs at 4:27 PM