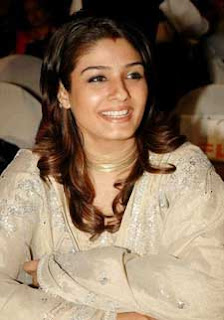 Bollywood actress Raveena Tandon, who looked ravishing while sashaying down the ramp for designer Nivedita Saboo at the ongoing Pune Fashion Week (PFW), revealed that the reason behind her fitness is her two kids.

"My fitness mantra is being hands on with my kids, don't leave the maids to do it and believe me you'll get back to your shape faster than you thought you would. That's what I did," Raveena told IANS.

The actress, who married distributor Anil Thadani in 2004, gave birth to a baby girl called Rasha March 16, 2005. She became mother again to a baby boy this time named Ranbir July 12, 2007.

As the showstopper of Saboo's show, Raveena sported a colourful flaired, long dress with sheer full sleeves and slight embellishments.

Asked if she was comfortable walking the ramp, the actress expressed: "I was very comfortable in this outfit. I did a little jig on the ramp as well, that showed my comfort level. Otherwise we need to suck our stomach in and you can't even breathe while walking on the ramp, but that didn't happen here. It was all fine and easy."

"What I liked about her clothes was that basically the fact that there was something for everyone. For every kind of person and every person. There was versatility in the collection," she added.

Saboo's collection was inspired by the Moroccon culture. What was unique about it was that the entire collection was developed from scratch, starting from dyeing, printing and ormentation of the fabric with Moroccon motifs.

The look was more cosmopolitan than region-specific. Different styles of blouses like halter-neck, back button and high neck were seen. The colour palette was vibrant with colours like pink, bottle green and orange but also had touches of beige and brown.

The garments were made of chiffon, silk, lycra and satin.

"I developed the fabric from the scratch. Nothing sourced out and that's why this collection is very close to my heart. It was a fabulous experience," Saboo said.
Posted by Indiblogs at 4:18 PM