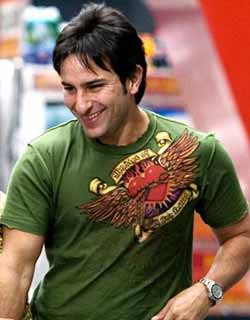 Saif Ali Khan is all set to play his first biographical character in Siddharth Anand's "2 States", a film adaptation of Chetan Bhagat's book, based on his own real-life experience, of a Punjabi boy who wants to marry his Tamil sweetheart but only with the consent of both their parents.

Saif is expected to spend time with Chetan Bhagat to understand his character, Krish, and get into Krish's mind. In real life too, Saif is all set to get into a cross-cultural marriage and "2 States" will be quite a learning curve for him.

Bhagat would like to exercise a more close vigil over the casting of the protagonists than he did in his novels' other movie adaptations like "Hello" ("One Night At The Call Centre") and "3 Idiots" ("5 Point Someone"). In both these cases Bhagat had no say. And he liked it that way.

But in "2 States", the personal element is extremely pronounced. For better or for worse, Saif came to the storyboard from the outset as part of the project.

And Bhagat is okay with that. Says the best-selling author: "It is not important for Krish to be played by a Punjabi or Ananya to be played by a Tamilian. I'm aware Saif is not a Punjabi. To me that serves the story's purpose even better. The whole idea of '2 States' is to convey a pan-India appeal. The novel is about an inter-state union. What better way to show this than to have a non-Punjabi actor playing my Punjabi protagonist?"

However, if Saif thinks he can just walk into the role of the Punjabi guy and claim it to be his own, as he did in Imtiaz Ali's "Love Aaj Kal", then he has another thought coming. Bhagat would like the Punjabi protagonist's projection to be free of stereotypes and external trappings.

"We're always showing Punjabis and Tamils in a culture-specific light. I wouldn't want my protagonists to be portrayed with regional eccentricities."

In brief, Saif has a lot of preparation to do this time. Unlike the Sardarji in "Love Aaj Kal", the Punjabi boy in "2 States" would have to be played as a product of a pan-Indian sensibility. It would require a personality transformation far more subtle than Saif's Langda Tyagi in Omkara with a very little physical prop.

Director Siddharth Anand, who is the star's old friend, is looking at a large stretch of preparation time for his hero which Saif would be able to give only after he completes his home production "Agent Vinod".

Bhagat admits that "2 States" is his most personal novel to date and the screen adaptation most precious to him.

"Like Krish in my novel I fell in love with a Tamil girl and we decided to marry only with the parents' consent. In the film 'Ek Duuje Ke Liye' when the Tamil boy decides to marry the Punjabi girl, their parents slap and beat up their respective offsprings. Aaj ke din kaun bachche maar khayenge? (Which children will submit to that today?) So you could say '2 States' is like 'Ek Duuje Ke Liye' meeting 'Dilwale Dulhaniya Le Jayenge'."
Posted by Indiblogs at 3:38 PM