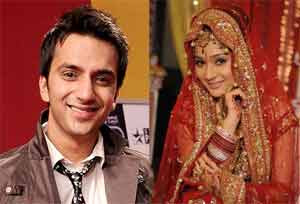 The "Bigg Boss" house turned into a beautiful wedding venue as TV actors Sara Khan and Ali Merchant tied the knot on the reality show Wednesday night. But doubts over its authenticity linger.

The couple, who had been dating for the past three years, was pronounced husband and wife in a simple Muslim wedding ceremony on the reality show.

However, rumours are abuzz that the two are already married. In an interview to a news channel, the bride's parents revealed that Sara and Ali had married in 2008.

"Both Sara and Ali already got married two years ago Nov 10. Ali's parents had asked us to stay mum about it as their career was on stake," Sara's mother told Aaj Tak news channel.

"We were not invited for the wedding," Sara's father added.

Previous episodes of "Bigg Boss", aired on Colors, had shown Sara tearing pictures of Ali, saying the relationship was going through a turbulent phase.

So was all this just an elaborate gimmick for television ratings?

Reports say Ali and Sara have been paid around Rs.50 lakh for their 'television wedding'.

True or not, the ceremony was a colourful affair.

While Sara wore a red and green wedding outfit with kundan embroidery, Ali wore a sherwani embellished with gold threads. The outfits were designed by Vikram Phadnis.

The mandap, where ceremony took place, was decorated with motiyaa (Jasmine flowers).

"I am very happy. I never expected that their wedding will be so grand. They are lucky to get this opportunity," said Irshad.

"Sara's parents couldn't make it to the marriage as her paternal grandmother expired. This had to be done in 'Bigg Boss' house, so they didn't inform her about the demise," he added.
Posted by Indiblogs at 4:24 PM