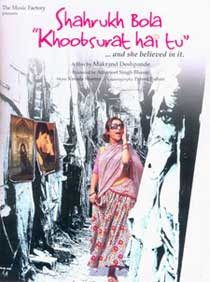 Veteran theatre actor Makrand Deshpande says "Shah Rukh Bola Khoobsurat Hai Tu" is a film about faith and it came about when he started wondering what happens if a much worshipped silver screen demigod like King Khan admires a commoner.

"I had seen the film 'Main Madhuri Dikshit Banna Chahti Hoon', where a person wanted to be an actor. The idea came from there. We are all devotees of our respective god; so I was in search of a human god," said Deshpande.

"I felt that when Shah Rukh comes on screen, he creates that aura for his fans and thought if he goes ahead and praises any of his devotees on the road, then what happens?" Deshpande said in an interview with IANS.

"Now, the roadside flower-selling girl takes Shah Rukh as god and she also believes that he will protect her. That's the whole point. The film is all about faith."

Deshpande has witnessed the trajectory of Shah Rukh Khan's success since they worked together in a Doordarshan television serial "Circus", and admits that King Khan from the very beginning of his acting career had the capacity to create an aura.

"My association with Shah Rukh has been so long. I have seen him from where he started and the position he has made for himself in these years. Since his television days, he had that capacity to break the screen. He was very focussed.

"When he meets someone, the person feels he is enamoured of him. If someone can do that, he is a god in today's time," said Deshpande who also featured with Shah Rukh in the song "Yun hi chala chal rahi" in "Swades".

All it took for Shah Rukh to agree to do the film was an SMS.

"He agreed to do it in one SMS. He is there in one scene and there is one dream sequence. Otherwise, the film talks so much about him that you will not feel that Shah Rukh is not there," said Deshpande who is in his early fifties.

Asked how he discovered his protagonist, Preetika Chawla, he said: "Preetika was coming out of Prithvi theatre and I told my assistants to go and ask her if she is an actor, or for just an audience and if she is interested to play the lead character of my film."

"I liked her 'small girl' stature. She was going to Australia for higher studies when I told her to work with me. Now her life has changed."

The director is certain that his film would find an audience though it shares the release date with director Ram Gopal Varma's second instalment of "Rakta Charitra" and the Hrithik-Aishwarya starrer "Guzaarish" Nov 19.

"It will find its audience. Luckily we have a huge film audience and its not that if anyone has seen one film, he won't see the second; he will see the third also," he said.

Deshpande is running the theatre group Ansh. He launcehd it in 1993 and has written, produced and directed about 30 plays, including "Chitra", "Ek Kadam Aage" and "Seema Badnam Hai". Some of his recent theatre work are "Joke" and "Poha Gone Wrong".

The director is ready with his second Hindi film too.

"I have also finished my second film. It's 'Miss Sundari' or 'Miss Beautiful', I don't know which title I will get finally. It's about a son and his aging parents," said Deshpande.
Posted by Indiblogs at 4:22 PM