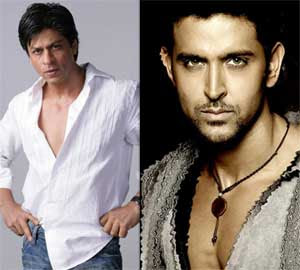 Shah Rukh Khan was so moved by Hrithik Roshan's performance as a paraplegic in "Guzaarish" that he yanked his younger colleague out of slumber and made him immediately drive down to his bungalow 'Mannat'.

Tired and fighting off a viral attack, Hrithik still drove down to 'Mannat'. And he and King Khan discussed "Guzaarish" and Hrithik's performance until 2 a.m.

"Shah Rukh had asked for a print of 'Guzaarish' because he's very fond of Hrithik. Also because Shah Rukh had played a mentally challenged character in 'My Name Is Khan', he was curious to see how Hrithik had approached the character of a physically disabled hero," said a source.

Shah Rukh was watching the film with his family and friends and it was half-way through that he rang up Hrithik and asked him to come home immediately. The two are close friends and their wives are even closer.

Said Hrithik: "In fact, Sussanne was already at 'Mannat'. When Shah Rukh wanted me to go over, I had no choice. He's always very generous."

The source added: "What started as professional inquisitiveness turned into a complete involvement with the on-screen goings-on. Shah Rukh felt Hrithik in 'Guzaarish' out-excelled his own performance in 'My Name Is Khan'. Shah Rukh also feels 'Guzaarish' was way superior to what the director Sanjay Leela Bhansali had achieved with Shah Rukh in 'Devdas'."

"Guzaarish", in which Hrithik plays a paraplegic, hit screens Friday and also stars Aishwarya Rai.
Posted by Indiblogs at 3:23 PM