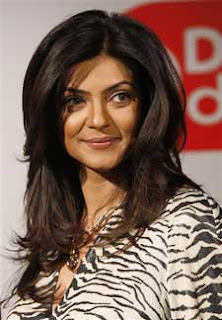 On Friday, Bollywood actress Sushmita will turn 35 and she is planning an all-girls party in Dubai with her two daughters and mother. The former beauty queen, known for living life on her own terms, is single right now and says marriage will happen only once in her life.

"It's going to be an all-girls' birthday for me this time. Three generations of Sen women all together. I'm so excited about it," she said just before leaving for Dubai.

Sushmita's mom lives in Dubai and she is joining her there with her daughters Renee, whom she adopted in 2000, and Alisha, whom she brought home earlier this year.

When asked about the absence of a man in her life, Sushmita laughed her throaty laughter and said: "At the moment my entire attention is on my two girls. By god's grace my elder one Renee is turning into quite an accomplished little lady. As for the newest Sen in the house, Alisha is so bright and inquisitive. My mom says I was exactly like her in my childhood."

Known for being frank and forthright, the actress has been open about her relationships with director Vikram Bhatt, actor Randeep Hooda and hotelier Sanjay Narang.

The next man in her life would probably be the one Sushmita marries.

"I'm in no hurry. But I do know marriage will happen only once in my life. Whoever I select will be with me for keeps," said Sushmita who was crowned Miss Universe in 1994 and two years later she entered Bollywood with Mahesh Bhatt's "Dastak".

But her big success came in the form of "Biwi No. 1" and she also featured opposite Shah Rukh Khan in the superhit film "Main Hoon Na". Some of her other hits are "Aankhen" and "Maine Pyaar Kyun Kiya?"

Her forthcoming release is "No Porblem". Interestingly Sushmita plays a psychotic suspicious wife who wants to kill her husband, played by Anil Kapoor, in the film which is releasing Dec 10.

"Now that's a role that could scare you off marriages forever. No, but seriously, I do believe in the institution of marriage," said Sushmita who also launched a production house called Tantra Productions.

As for turning 35 with pride, she says: "Is there any point in claiming to be a few years younger? My life and career are an open book. Anyone who has followed my journey from the age that I won the crown (for Miss Universe) would know exactly how old I am."

"I am very happy to tell the world I am 35 now - that is, for those who are interested in such things," said the star who also judged dance reality show "Ek Khiladi Ek Haseena" on Colors channel.
Posted by Indiblogs at 4:04 PM