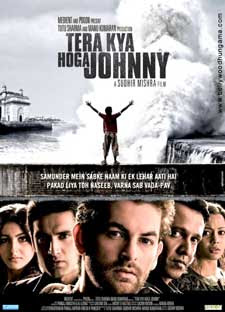 Sudhir Mishra's much-delayed project "Tera Kya Hoga Johnny" will finally hit the screens Dec 17, but the director has brushed aside comparisons with the Oscar-winning sensation "Slumdog Millionaire" and says his film is an insider's tribute to Mumbai.

"This is an insider making a film. I belong to Mumbai, I live here. So there are a lot of things I take for granted (when it comes to the city and its influence in the movie). And I like 'Slumdog', but I didn't make 'Tera Kya Hoga Johnny' as an answer to that," Mishra told IANS in a telephonic interview from Mumbai.

"However, it could be called an answer too, as some people who saw it in London said so directly," he added.

"Tera Kya Hoga..." was shown as a work in progress at the London Film Festival and has been awaiting release since 2008.

Negating the "Slumdog" comparisons, Mishra, however, asserted that the movie is an ode to the maximum city.

"It is the story of hope, ambition and life of an unfortunate 16-year-old boy Johnny, who lives on the streets of Mumbai and sells coffee. The story is about how he pins his hope on another man (Neil Nitin Mukesh) and how it eventually turns out to be a thriller, seen through his eyes and a mysterious character," said the National Award winner.

"It is a story of resilience of all sorts of people who are trying to rewrite the screenplay of their lives. Mumbai is one of the cities in India that offers one a chance to do so and lets one be what one wants to be. It is a tribute to the maximum city," he added.

The fascination of Mishra, co-writer of Bollywood's cult classic "Jaane Bhi Do Yaaron", with Mumbai is not new. He has earlier explored the city through movies like "Dharavi", "Is Raat Ki Subah Nahi" and "Chameli".

"I have a fascination for the city. I adore it and love it. I have an affection for that place. You can smell it in my work. I have always made films that revolve around Mumbai and its spirit," he said.

So what led to the long delay in its release?

"There were some issues... nothing to do with the film per se but with money, etc. It's all over now," said the director, whose last outing was "Khoya Khoya Chand" in 2007.

Major chunks of "Tera Kya Hoga Jhonny" were also leaked on YouTube. Asked if it will mar the commercial viability of the venture, Mishra said: "Not at all. It will in fact serve as a good promotional platform for the movie and help it. It will work as a kind of trailer."

"The version that people earlier saw was an older rough cut that went to a film festival as a work in progress. That's it. But it is now a brand new film with brand new music, some additional new footage and some scenes that have been reshot. It is now an absolutely fresh film," he added.

"The real 'Johnny' will now go to film festivals after the release. We want to release it in Mumbai and the rest of India first. The main purpose of the film is to engage the Indian audience and then the real cut will go to festivals post-that," he said.

Mishra doesn't rule out the possibilities of a sequel too.

"Yes, if the script works out, then we will definitely try out a sequel as the ending is such that it can be taken forward," he said.

His future projects include "Yeh Saali Zindagi", "Dhruv" and "Hitman".
Posted by Indiblogs at 4:02 PM