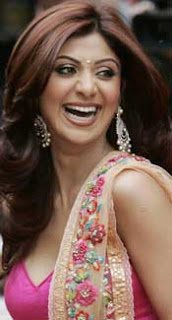 The actress, who is married to London-based businessman Raj Kundra, was supposed to fly out of Mumbai to celebrate the occasion. But now she can't due to a bad throat infection.

An upset Shilpa wrote on microblogging site Twitter: "My first wedding anniversary tomorrow (Monday) and was diagnosd with Pharyngitis yesterday (Saturday), sick like a dog. Was suppose to leave town but couldn't (What a horrible start)."

Shilpa had met Raj after her win on the British reality show "Big Brother" in 2007 and the couple exchanged wedding vows at a close-knit family affair in Khandala last year.

The wedding took place as per the Bunt tradition of the Mangalorean community that Shetty belongs to.
Posted by Indiblogs at 4:15 PM