Aamir Khan, Rani Mukherjee to work together in a suspense drama 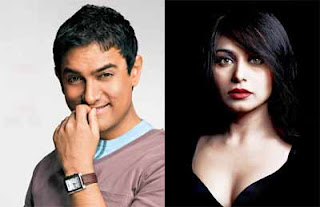 Bollywood actress Rani Mukerji, who last shared screen space with Aamir Khan in 2005, will be seen opposite him yet again in Reema Katgi's upcoming suspense drama.

"I am doing a film with Aamir. Over the years our chemistry will only get better, so it'll be better in this film," Rani told reporters here.

"For me its wonderful to work with Aamir and specially after so long because the last film I did with him was ‘Mangal Pandey: The Rising' and over there also it was not a film based on us. But this one is more about us," she added.

The 32-year-old also revealed that Aamir and Shah Rukh Khan were her favourite actors.

"Shah Rukh and Aamir have always been my favourites and I have learnt a lot from them in my professional pursuits and in my life. It is my great honour that I worked with them in such wonderful films. I can do anything for them," she said.

The actress, who was last seen opposite Shah Rukh in a full fledged role in 2006's "Kabhi Alvida Naa Kehna", said she wanted to work with him soon.

"I'm going to meet Shah Rukh and tell him that he better start a film with me soon because I'm missing working with him," she said.
Posted by Indiblogs at 3:53 PM