Actress Keira Knightley is too shy for fame 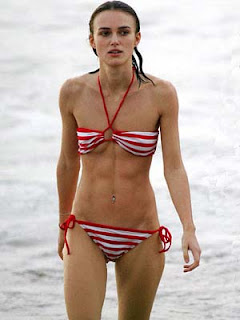 London, Dec 16 (IANS) Actress Keira Knightley deliberately dresses down when she is out in public because she's too shy to talk to her fans.

The "Pirates of the Caribbean" star admits she struggles with fame because she is naturally very shy and feels uncomfortable when people stop her in the street, reports contactmusic.com.

The 25-year-old actress always wears her scruffiest clothes when out and about in a bid to go unnoticed, and avoids showbiz parties to maintain her low profile.

"I think it (fame) broke something in me. I was told very early on that if I didn't go out to openings and parties and events I would be left alone. I didn't, and they still didn't leave me alone," said Knightley.

"I knew it was part of the deal in the life I had signed up to, but the fear of it has never left me. I'm still not good at being recognised. I wear scruffy clothes and hats and keep my head well down," she added.
Posted by Indiblogs at 10:59 AM