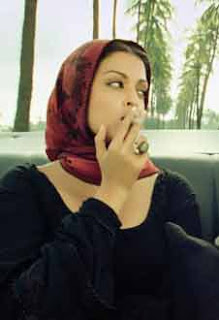 The co-producer of "Guzaarish" has justified the controversial promotional posters of the film that show Aishwarya Rai smoking a cigarette, saying it is "a creative requirement of the script".

A letter issued by UTV Software Communications Private Limited to the National Organisation for Tobacco Eradication (NOTE), a tobacco vigilante organisation headquartered in Goa, has stated that Ash's smoking act on the posters was necessary.

"The scene in which the character, played by Aishwarya Rai, is shown smoking was merely a creative requirement for the script," UTV Software communications limited has said in a letter to an anti-tobacco organization, quoting a spokesperson.

Earlier, NOTE had demanded the ‘smoking' posters be deleted from the promotional campaign. In a written complaint, the organisation's general secretary Shekhar Salkar had said that the display of the posters showing Aishwarya smoking could inspire her fans to take up the ‘cancer-stick'.

"The innumerable posters and banners of ‘Guzaarish' displayed all over Mumbai shows Bollywood icon Aishwarya Rai smoking a cigarette. There would be thousands of other scenes which could be displayed to convey the storyline of the film, yet the producer has chosen this particular one, quiet oblivious to its after-effect," Salkar said, threatening the producer and actor of the film with a legal suit.

In a written response to NOTE's caution, UTV has also said: "We understand that as a healthcare professional, it is your prerogative to oppose any activity that may promote smoking. However, whilst we appreciate your concern, we would also like to mention that the film `Guzaarish' is not about smoking and neither does it promote smoking in any manner whatsoever".

Reacting to UTV's response, Salkar said: "I have seen the film myself. There is a single scene which shows smoking incident. But the poster of the film picks and chooses the same frame in their advertisement campaign. Actually this is clandestine advertisement of a tobacco product.

"Where is the issue of showing smoking scene when the movies speaks of euthanasia," he added.

NOTE, has in the past made actors Amitabh Bachchan, Ajay Devgan and Vivek Oberoi among Bollywood biggies either shell out fines for their violations or dragged them to court for directly or indirectly promoting tobacco on the screen and off it.
Posted by Indiblogs at 4:15 PM