Ajay devgan, Kajol came together due to my song: Anu Malik 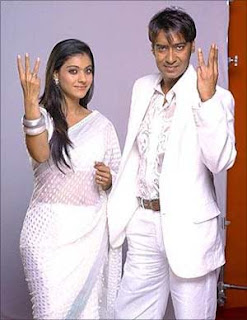 Mumbai, Dec 21 (IANS) Bollywood music director Anu Malik feels a strong bond with stars Kajol and Ajay Devgn, so much so that he believes his songs might be the reason the couple fell in love.

"I don't know whether I'm Kajol's lucky mascot or she is mine but we have had some great hits. I feel a karmic connection with Kajol and Ajay," Malik told IANS.

"They never admit to this, but I have a strong suspicion that it was my song 'I am 16' in the film 'Hulchul' starring the couple that brought them together. They'll never say it, how they fell in love, but they were magical in that song and I think it all started from there," he added.

Malik has composed for Kajol in films like "Baazigar", "Hum Aapke Dil Mein Rehte Hain" and "Hulchul" while for Ajay he as composed in "Vijaypath" and "Diljale".

Now after many years he has given music for their film "Toonpur Ka Superhero", which is a live action animation film.

The 50-year-old, who has given many chartbuster scores in films like "Main Khiladi Tu Anari", "Akele Hum Akele Tum", "Judwaa", "Border", "Refugee" and "Main Hoon Na", revealed that giving music for this film was extremely challenging.

"This has been a very close and special film for me as a creative person in the last 32 years of my career. It's not a very easy project to compose music for."
`
"This was a challenge for me. The fact as to how do I compose a theme that is hummable? How do I keep the theme of the film alive? These factors were roving in my mind. So getting that right was a task," he said.

The film, directed by Kireet Khurana, is slated to hit screens Dec 24. It includes six tracks, four of which have been used in the film.

According to the composer, people start judging very soon; so it's possible that they find the soundtrack different, but that's how it was supposed to be made.

"People start judging very soon. They may not like the soundtrack; I'm open to criticism but it's very important for people to understand that all these are situation-based songs, hence different," he expressed.

"We cannot have an item number or a love song because the situations don't demand them," he added.