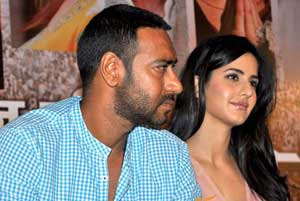 On evaluating the industry players on the basis of return on investment for the first time, the actors have won the top spots after the economic quotient of their movies was taken into consideration as a cornerstone for mapping their success.

"Figures talk, you cannot manipulate it, you cannot play games with it," said Ajay, who has had six releases this year including "Atithi Tum Kab Jaoge?" "Raajneeti", "Golmaal 3", and "Once Upon a Time in Mumbaai" and except "Aakrosh" and "Toonpur Ka Superhero", all his movies did good business.

Breaking all records is Salman Khan starrer "Dabangg" that has been named as the top grosser of the year. Debut director Abhinav Kashyap bagged the most profitable director trophy for the corrupt cop saga with audiences paying a cumulative sum of over Rs.140 crore to watch his film.

"It is a fair assessment of the recipient's work and his popularity and mass appeal," said Arbaaz Khan, winner of the most successful producer for "Dabangg".

This will be the first time in India where an initiative has sought to recognize even the marketers, distributors, production houses and exhibitors on the basis of business the industry has generated in 2010.

"All those who represent the industry, actors, musicians and directors have only been judged on creative parameters. No one had thought of evaluating them on how much business they had generated," Anurag Bedi, business head, ETC, said in a statement.

"Such an evaluation will bring forward the workings of Bollywood as an industry," he added.

The ceremony also has first time categories such as marketing (best marketed film of the year - "My Name Is Khan"), distribution (special award for film distribution) and promotion (most successful banner/corporate house/production house of the year), among others.

While the award for the most profitable multiplex chain of the year goes to PVR Cinemas, the most successful small-budget film of the year trophy will be handed over to "Peepli Live". Corporate house of the year is Shree Ashtvinayak Cinevison Ltd.

The ceremony will also recognise the most successful Hollywood film of the year with "Inception" taking centrestage.

"ETC Bollywood Business Awards 2010 - Evaluating Movie Moghuls" will air Tuesday at 8.30 p.m. on ETC channel.
Posted by Indiblogs at 10:38 AM