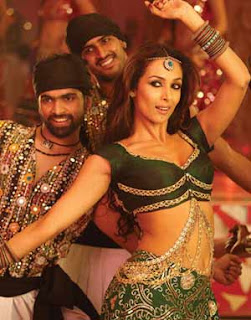 Islamabad, Dec 6 (IANS) Now "Munni badnam hui" has found a place in the political circles of Pakistan with politicians from leading parties using the hit Bollywood item song to take a swipe at one another.

Speaking at a party function a couple of days ago, ruling Pakistan Peoples Party (PPP) leader Imtiaz Safdar Warraich said: "We are being blamed for the wrong doings of others." In an obvious dig at the opposition, Pakistan Muslim League-N (PML-N), he said: "Our situation is such that we can only say, 'Munni badnam hui darling tere liye'."

Punjab Law Minister and PML-N stalwart Rana Sanaullah was quick to latch on to the opportunity. "What a pity that the PPP leader has termed the entire party as Munni," he said, adding that "this Munni is not getting a bad name because of darling but because of her own actions".

This is the latest reflection of the popularity of the Bollywood song picturised on Malaika Arora in the movie "Dabangg".

There's a play called "Munni Badnam Hui" that's being used to spice up TV scripts and wedding revellers are dancing feverishly to its tune.

The song has become a rage in Pakistan. In fact, Malaika has almost become a household name in Pakistan after the song composed by Lalit Pandit.

No wedding or function is considered complete without the song. It also blares from audio systems in cars and music shops while FM radio stations are swarmed with requests to play "Munni badnam hui".
However, the song has created problems for the real life Munnis in the country. Munni, a mother of two from Lahore, has been harassed so much that she has shut her small shop.

"Every now and then someone will come to my store and say 'Munni badnam hui darling tere liye' in front of my customers. First, I didn't pay much attention and tried to ignore it, but then it became a routine event and I started to get irritated," Munni said.

This Munni is not the only one to face problems. Shahida Munni, principal of a school in Lahore, had been given the nickname Munni by her family and friends.

"While walking in my neighbourhood, I am always scared that someone will start to sing the song. Most of the time my fears become reality as many boys either sing the song loudly or play it on the stereo!" Shahida said.
Posted by Indiblogs at 10:56 AM