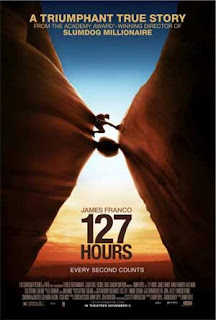 "We are delighted with the response and buzz that '127 Hours' is garnering across the world. It is a very special film and the awards are a testimony to its brilliance. We believe that the Indian audiences will appreciate this outstanding film, just like they did 'Slumdog Millionaire'," Vijay Singh, chief executive officer, distributors Fox Star Studios India, said in a statement.

Produced, co-written and directed by Boyle, the movie stars James Franco as real-life mountain climber Aron Ralston, who became trapped by a boulder in Robbers Roost, Utah, for more than five days in 2003.

Ralston, however, battled his demons to finally discover he has the courage and the wherewithal to extricate himself by any means necessary, descend a 65 foot wall and hike over eight miles before he is finally rescued.

The film, based on Ralston's autobiography "Between a Rock and a Hard Place", was written by Boyle and Simon Beaufoy and produced by Christian Colson, who previously teamed up for "Slumdog Millionaire", and John Smithson. Premiered on Sep 4, the film saw limited release in New York and Los Angeles Nov 5.
Posted by Indiblogs at 11:19 AM