Dharmendra says he is evergreen 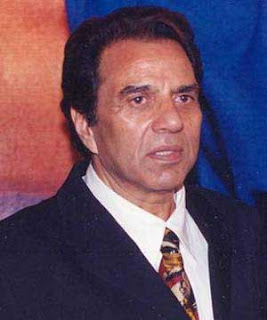 Mumbai, Dec 30 (IANS) Horses and men never grow old, says Dharmendra, still young at 75 and getting ready to entertain his legion of fans in the upcoming comedy "Yamla Pagla Deewana".

"There is a saying horses and men never grow old and I'm one of those men who was tagged as the 'He Man'. So can a 'He Man' afford to become old? This tag keeps me young at heart and I don't let age overpower me," Dharmendra told IANS in an exclusive interview.

"My soul is still very innocent, like that of a mischievous kid. Since I feel young inside, it reflects on my face," he added.

The senior actor, who has completed 50 years in the industry, has entertained audience with movies of all genres -- from the intense "Bandini" and "Satyakaam" to outright potboilers like "Raja Jani" and "Pratigya", and, of course, as the comic artist with perfect timing in "Sholay" and "Chupke Chupke".

His laugh riot "Yamla Pagla Deewana" will hit screens Jan 14 and will see him teaming up with his actor sons - Sunny and Bobby - after the 2007 hit family drama "Apne".

The veteran actor said when asked what took him so long to come back to movies: "After 'Apne' I wanted to do more films, but we were not getting a very good script. Otherwise who wants to sit at home? Someone who loves acting, why would he want to stay at home? I'm always in search of good roles."

"Finally, we decided to do this film and things worked out," added the senior actor, who will also feature in his wife Hema's directorial venture "Tell Me Oh Khuda".

Director Samir Karnik has taken the responsibility of bringing the father-sons combo on screen again with the fun flick, which originally starred only Sunny and Bobby.

"First we had planned to make the film only with Sunny and Bobby and that time the name of the film was 'Double Trouble'. But we couldn't get the title because it was already registered with someone else.

"So I just joked that why not you make it 'Triple Double' and I'll also act in the film. Sunny liked the idea and we changed the story a little bit to incorporate my character too," said the still very garam Dharam.

The story revolves around a Sikh guy living in Canada, who learns that his father and brother are alive and live in Benares. He embarks on a journey to bring the family together.

In the film, Bobby has very friendly relationship with his on- and off-screen father, so much so that he even calls him by his first name.

"Everyone knows we live according to the culture of Indian society where there is respect for parents and certain rules are followed. But when the camera rolls, then you forget who is who. Then you become the characters of the film.

"In this film Bobby and I share a very different rapport as compared to in real life. We are more of friends there. The relationship and chemistry is very open. It was quite a nice experience and fun to do that," said the veteran actor.

How does he feel after completing 50 years in Bollywood?

"It seems that these 50 years just passed by in a jiffy. When you think of it, 50 years seems like a long time, but I still feel I came to Bombay yesterday.

"I want to live that life all over again and want to make it even more beautiful. I'll throw all the mistakes I made and make it a much better life."
Posted by Indiblogs at 2:34 PM