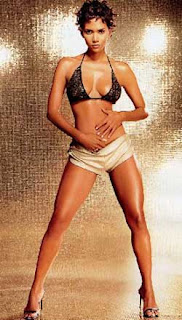 London, Dec 26 (IANS) Oscar-award winning actress Halle Berry was forced to postpone a meeting between her daughter Nahla and her acting hero Sidney Poitier after paparazzi ruined the special get-together.

The actress arranged to spend time with the Oscar winner earlier this month as part of a photoshoot and an interview and she thought it would be nice for her daughter to meet the man who had meant so much to her while she was growing up, reports femalefirst.co.uk.

But when photographers learnt about the top secret meeting and showed up outside Poitier's Beverly Hills home, they terrified the two-year-old and she had to be led away in tears by a nanny.

"Sidney is part of our history. He's a legend, and one day I knew she (Nahla) would thank me for allowing her to be in his presence," said Berry.

"I was supposed to come over for Thanksgiving this year... I have to bring my daughter back. She has to have this experience," she added.
Posted by Indiblogs at 11:31 AM