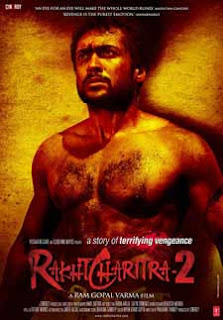 In this sequel to Ram Gopal Varma's month-old film about gangwars during the time of politics and elections we get to see for the first time in a Hindi film Suriya, an actor of searing intensity and devastating emotional velocity. Suriya takes the frontseat in the sequel to create an ambience of implosive violence. Yes, we've never seen an actor so controlled in his intensity for a long time. Suriya's vendetta spree certainly lends an added sheen to the proceedings.

Whether expressing his love for his wife (Priya Mani, over-madeup) and baby or hatred for his opponent Paritala Ravi (Vivek Oberoi, not able to add to his performance from the first part), Suriya's eyes convey a smouldering universe of indignation injustice grief and anger.

Cleverly Varma has given Suriya long stretches of silence in which the star-actor negotiates his angst-filled journey from betrayal to redemption. Suriya's lengthy introduction sequence, the even lengthier attempt to kill him in the court house and the long fight sequence in jail are all 'items' constructed to spotlight the star's agile histrionics.

"Rakhta Charitra2" goes a little slower on the body count than the first part. It is still one of the bloodiest, most violent films in living memory.

This must be the quickest sequel ever. "Rakht Charitra2" is better, more engaging and riveting in terms of content and drama. Full credit to Ram Gopal Varma for re-creating the savage world of politics and bloodshed in the Andhra hinterland. With skilled hands, Varma weaves the theme of an internecine war between two Men Who Would Be King In The Concrete Jungle.

The background score and editing highlight the ruthless profile of the hinterland. "Rakht Charitra 2" goes beyond the first part in pursuit of the savage impulses that accentuate the hunger for power. Suriya has the most pained eyes since Om Puri in "Aakrosh". Between the pleading and the bleeding that are projected into his character, Suriya proves himself the discovery of the year.

Watch "Rakht Charitra2" for Suriya. And then watch it for the parable of violence that Ram Gopal Varma continues to construct in search of a meaning for the cinema beyond surface beauty.

Posted by Indiblogs at 3:38 PM