Kajol says Ajay and I don't agree on scripts easily 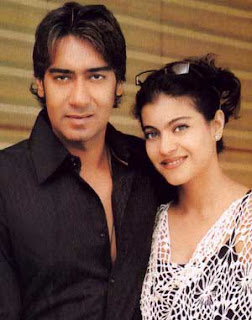 Mumbai, Dec 16 (IANS) Kajol, who will be seen with husband Ajay Devgn on screen after a gap of two years in the animation film "Toonpur Ka Superhero", says the two cannot team up often because they hardly ever like the same script.

"Ajay and I will always take years to be together on screen because we hardly ever agree on a script. We actually don't agree on most scripts," Kajol, 35, told IANS in an interview.

"What he thinks as workable is something that I find not working for me at all. So it's very rare that we actually come across something that we both agree on and we both would like to work on," she added.

They tied the knot in 1999 after a few years of courtship and are known as one of the best couples in Bollywood.

They created reel magic with "Hulchul", "Pyar Toh Hona Hi Tha", "Ishq" and "Dil Kya Kare". Their last outing together was Ajay's directorial debut "U Me Aur Hum" (2008), which was critically appreciated for its theme and performances but was a box-office dud.

The actress says over the years she has become more comfortable working with Ajay, 41.

"As the years go by, you get more comfortable and get used to the way the other person works; otherwise the process remains the same. It just becomes more of a team."

Now once again they are set to create celluloid magic with the live action animation movie "Toonpur Ka Superhero" slated to hit the screens Dec 24. Directed by Kireet Khurana, the film has been produced by Krishika Lulla and Kumar Mangat Pathak.

The film shows Ajay and Kajol playing humans who enter the world of cartoons. This is Kajol's first animation film and she asserts it was not a cakewalk.

"It was very tough working on the film. We even had to re-shoot a few scenes. Dubbing and shooting was equally frustrating. You had to keep so many things in mind like timing and everything," she said.

"There were a few action sequences too where I had to do action in front of a green space, so I was smiling, scowling, laughing - all in the wrong places! However, our action director Jack Gill was very good and very patient with us," she said.

The actress dismissed rumours that the film was releasing after a delay.

"It's releasing when we thought it would. Animation takes time. We shot in three-four months but then a lot more has to be done on each character. Karan Johar's animation film is still being made, 'Avatar' took five years to make. Simply because you don't want to mess it up. There is so much on stake," she said.

In the film Ajay is the superhero, but Kajol's favourite is Superman. "My superhero is the Superman. I loved him; I read all his comics," she announced.

Finally, after two releases this year, the actress is planning to take time off.

"I'm not working on any film right now. No plans as of now. It's very difficult handling two kids. I don't get time and I want to give all my time to them for some time now," she said.

The couple have two children - seven-year-old daughter Nysa born in 2003 and Yug, who was born this year.
Posted by Indiblogs at 10:31 AM